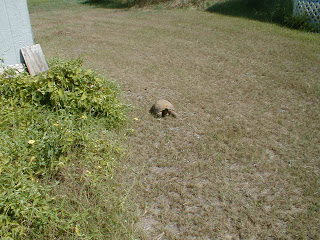 I was taking a 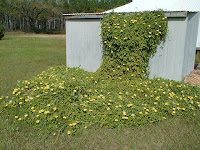 photo of the Climbing Blackeyed Susan plant one day last year, when I saw this little guy rapidly making his way towards me.


Since I'd never heard of an Attack Turtle before, I waited to see just how close it would come to me.

As you can see, it got pretty close, but still no attack~ So I waited. 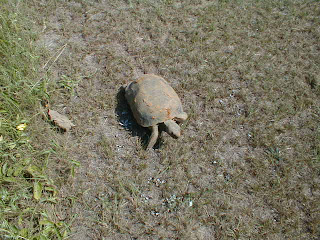 . . . And the little guy totally ignored me, did not speed up as he passed me or while I followed to see where he was going. He then turned right to go behind the lawn supply shed and over to our daughter's storage shed, to dissapear down the new burrow he'd dug. 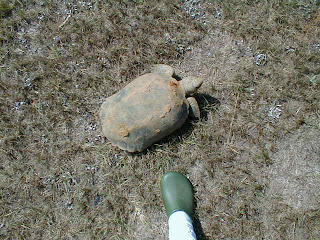 He, or his friends, have due tunnels in the south field far from our "yard" and right beside our yard, under the first fig tree we planted (which is now dying), under our daughter's storage shed, under my storage shet, in the east field, and under the trees out near the road. At least those are the only ones we've found . . .

They are a protected species here, but even if they were not we would not harm them. We don't kill any wildlife that comes in our yard. But we do kill most of the mice that come into our house. I don't think that's against state law~ ~ ~

The gopher tortoise, also called a gopher or gopher turtle, is Georgia's state reptile and one of the high-priority animals listed in Georgia's State Wildlife Action Plan (SWAP). Georgia's only tortoise grows to nearly 15 inches in carapace length (the length of the upper shell) and is found from southeastern Louisiana to southwestern South Carolina and from Georgia's fall line to southern Florida. The majority of tortoises are found in South Georgia and north-central Florida.
The gopher tortoise favors sandy soils south of the fall line. Prescribed fire is necessary to preserve its habitat since fire spurs groundcover growth and keeps dry upland habitats such as longleaf pine and scrub oak forests open.

With wide, hard-scaled front feet with large nails, the gopher tortoise is skilled at digging burrows, which provide critical refuge from temperature extremes and fires. Their tunnels average six feet deep and 15 feet long, though some run more than 40 feet. Tortoises often frequent more than one burrow in a year. Other species such as eastern indigo snakes and gopher frogs also depend on the burrows.

The gopher tortoise mainly grasses and low-growing plants, such as legumes, and also will dine on less desirable foods like prickly pear cactus and stinging nettle.

Breeding season lasts from April to July, when the female tortoises lay clutches of five to seven eggs in the sandy mound outside the burrow. Hatchlings emerge August to October, and male gopher tortoises take up to 18 years to reach sexual maturity, and females take up to 21 years.
Adult males will fight over females and burrows, ramming each other with their gular projections, elongated scutes or plates under their neck. Females and males also defend burrows by turning sideways in the tunnels, blocking access.

Gopher tortoise populations suffer mainly from habitat loss and fragmentation due to forestry practices; development; fire suppression; disease; invasive species, such as fire ants that destroy eggs and hatchlings; decreased presence of juvenile tortoises from predators; and gassing burrows, an illegal practice used to locate rattlesnakes.
Posted by Stitch 'n Frog at 9:00 AM

Oh Gail,
I have never seen one of those turtles nor heard of it. Thanks for sharing with us. I will have to open your blog for my grandchildren to see & read about it.
Do they really attack?
Elsie <><