A New Year, A New Goal

Another new year is here, but it seems that it hasn't been but a few weeks since we celebrated the newness of 2013!

As my Mom told me numerous times, the older we get, the faster time passes.  Sure was sad to find that she was right.  She also told me that I should take better care of myself because in my older years I would be very glad I had. Again, she was 100% right.  I'll be 70 this summer and feel more like 90 at the youngest!  Yes, I had fun, sometimes had a real blast, but now that it has caught up with me I realize that the fun when young is not worth the pain and suffering when one is older.
Ah well, I Played as a Youngster and now am Paying as an Oldster~  It's kind of like using a credit card for purchases, sooner or later you have to pay the bill.

This past Fall I had another hospital event.  Had to go to the ER, feeling awful, and had emergency surgery as quickly as the doctors got there and prep me and themselves.  What I had thought was possibly a stomach ulcer, turned out to be my gallbladder.  It had already begun going gangrene. Yuck!  The doc said that I was very lucky I did not put off coming in any longer, or I might not have made it.  Last year it was the appendix, which had not gone gangrene, but did start to ooze poisonous yuck as they lifted it out.
I asked him if there were any other organs that I needed to be on the watch for signs of needing to be taken out, but he said that he thought I was clear now.  Sure hope so, doctor and hospital bills are horrendous, even with two health insurance policies! But thank goodness that we do have them!

So now I am trying to get back to crocheting daily, and hubby & I set two goals for 2014, not actually New Year's Resolutions, but goals that we plan to meet by years end.
First, is to eat less and healthier. It sure hurt today to get up and have no pastry waiting to be devoured! But we'll adjust to it in a few weekends.  I'm sure that a bowl of oatmeal is much healthier than pastry from Publix, even if it doesn't taste quite as good.
Second, is to declutter and clear the house of things we no longer use.  It will be easier now than later on, and we both want the house neater and more enjoyable. But it will be very hard to get rid of things that bring back good memories. Still, it's needful. If we ever have to move into an apartment so we don't have yard & upkeep to do on our home, we would have to have a lot less Stuff.

Sadly, our cats refused to go on the healthier diet with us. They threatened to put mice in the bed and in our shoes if we cut off their treats. While neither of us are afraid of mice, we do draw the line at having them in our bed or shoes. So the cats still get their treats. And we make a lap for them upon demand. And believe me, they demand a LOT!  LOL~
But could you turn away a cat being so mannerly while waiting for her share of a buttered biscuit? 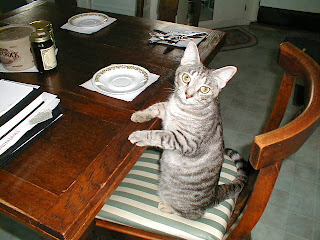 On my crochet front, I'm hooking a simple hat for our grandson, and working on the squares for an afghan for my BFF of 46 years.  Isn't the pattern lovely? 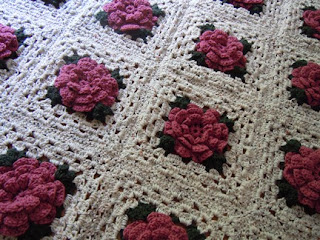 Her colors are rose, dark green, and cream. It is so pretty and will look great in her bedroom!
Ok, so tell me what YOU are up to in this brand new year!  I'll be hoping to hear about your goals and plans too~﻿