A Shawl for All Seasons~ 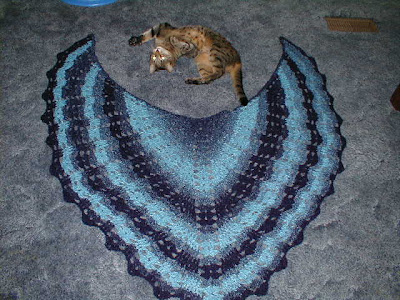 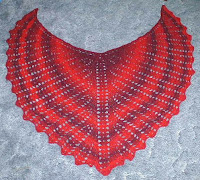 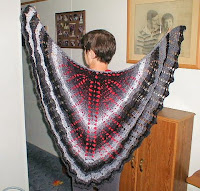 Shawls come in many shapes, sizes, and colors.  They range from heavy winter warmers, to light and airy summer show offs~
The Butterfly shawl, is between those two ends of the spectrum.  It is light, yet warm, and can be worn at all times of year.  In summer it excells in keeping you warm in over air-conditioned places.  And in winter it is perfect for indoor wear to give you that little extra warmth for more comfort.
The Butterfly shawl can be found in my Etsy store -
http://www.etsy.com/shop/StitchnFrog
and can be made in various colors and sizes. 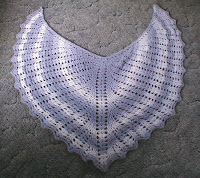 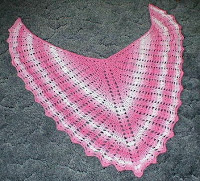 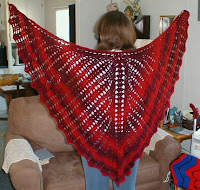 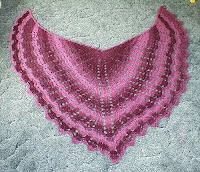 Two new patterns for me

Two new patterns for me to work on!  But I have to wait for the yarn to be delivered.  I love living out in the country, near a small town, but having to order things like yarn and await their delivery is a drawback~  However the peace and quiet far outweight the few drawbacks.
Both patterns are from Annie's Attic, and both are for summer tops.  Tho they could also be worn in winter if made in a warmer yarn and worn with a jacket.
This one, will be the first that I make; 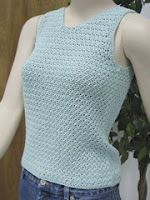 And this one will be next~ 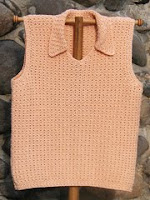 I liked the short story, The Cube, and just today The Cube, part 2, Johnny Hooks Is Free went up on Amazon.
It actually is better than the first (IMHO) and I enjoyed reading it too.  I can't imagine not seeing a sunrise or tree or grass, for five years!  If you are interested, you can find the story here;
http://www.amazon.com/Cube-Part-Johnny-Hooks-ebook/dp/B003NNUX9E/ref=pd_rhf_p_t_1
And I'm anxious to read the S/F novel that he is working on.  Will be glad when it's at Amazon too!
Posted by Stitch 'n Frog at 12:38 PM No comments: 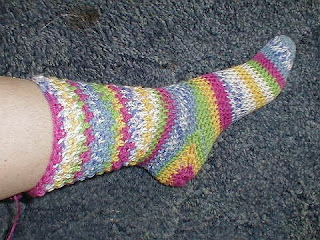 I recently bought the book, "Knit One, Purl Two, In Crochet" and decided to try it on a sock pattern that I like.

Using some Sassy Stripes yarn that was bought before everyone ran out of it, this is the first completed sock.

This pair fits well, and are comfortable.  So now pairs 2, 3, and 4 are on my hooks.  I am working on pair #3 until it is finished, then will move on to the next pair.  Normally I have only one pair working at the time, but misjudged the size and made the start of one pair too large, so set them aside for someone else, and started another pair for myself.  Pair #3 is for our daughter.

And then I started a pair for another friend, thus winding up with four pairs of socks in various stages of completion

I've seen that I like working on both socks of a pair, at the same time, so that when one sock is completed the second is not far behind..  It's easier for me to not wind up with several single socks with no mate by working them this way . . .  Since FMS has set its claws in me, my attention span can be good, or it can be about the same as a gnat's~

Thanks to two efriends, I have been led to discover square knitting needles~  I had to stop knitting several years ago due to arthritis/carpal tunnel in both hands/wrists.  But the square needles make it doable for me again.  They are easier to hold and even pick up the yarn easier.  Weird but true.  For the double-strand slippers we  like, I got a pair of #10 needles from Kollage.  Later I want to get two pair of square wood needles from a seller on ebay, Coker Yarn - Knit Bin.  I like the Kollage needles, but just want to try the wooden ones as well.

Learning lots of new things in my sixties!  And it's fun!

What are YOU learning and what's is on YOUR hooks and needles?
Posted by Stitch 'n Frog at 3:03 AM No comments:

Loctollipop - - She looks like an Octopus, but is a Sucker for Pain! 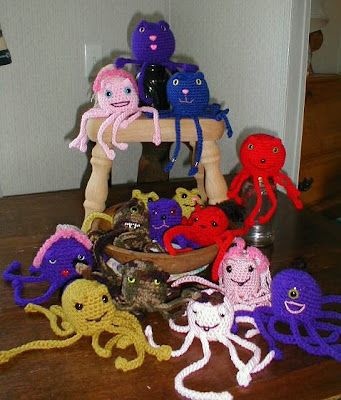 For Sale in my Etsy http://www.etsy.com/shop/StitchnFrog Store
Posted by Stitch 'n Frog at 10:46 AM 1 comment: