I've been working on several on-going WIP's - OctoGottcha creatures for the Fall Arts & Crafts fairs, Pot & Plate Pinchers (my variation of the pattern), dishcloths, potholders, etc.  And helping Wendy G with an afghan she promised a cute little girl.  I'm making most of the squares, she is making less squares but is going to assemble the afghan.

An OctoGottcha is a creature that is very mischevious.  When it's human puts it on another person's head, it sneaks out some of that person's brains, then puts them into its person's head.  Of course the human must be very careful as to who's head they choose for their OctoGottcha so that they don't accidently have dumb-brains snuck out and placed into their head.  That would be awful!  This is what some of the OctoGottchas look like, so you can be wary of anyone with one of these little guys on their shoulder . . . . . . 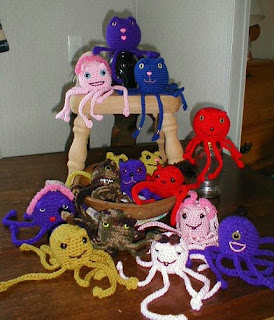 Photos of other WIP's that are being worked on today, will hopefully be posted next week.  And all items may be purchased through my Etsy store~
Etsy shop of Stitch 'n Frog 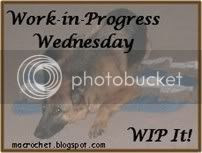 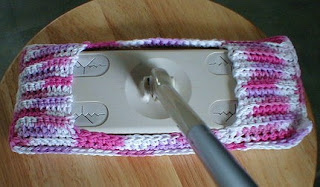 Will make in color/s of your choice, in either all Cotton or with a Cotton pad & synthetic top. PM me for colors available.

Advantages of a Reusable pad:

** Costs less - one pad will last for a long time. I have been using mine for over a year and it's still working perfectly.

** Excellent for dry or wet use. Mops as well as sweeps. Good for all types of non-carpeted floors.

** Washable - wash cold, lay fat to dry. No adding to trash dumps. You may wash cold and dry on low heat, but this may cause some shrinkage.

** You may color coordinate to your likes.  Bottom will always be 100% cotton, but top may be made of synthetic yarn and in any color of your choice.

** Less trash going to the landfill.

** No chemicals when wet mopping if you use a mixture of White Vinegar and water. Added Benefit of vinegar & water solution are; vinegar disinfects as you mop; cleans grease and grime; And Vinegar removes odors.

** Ecologically sound. No trees killed to make this pad, and it is biodegradable when discarded after it's long usage.

Paired with my Broomstick Duster 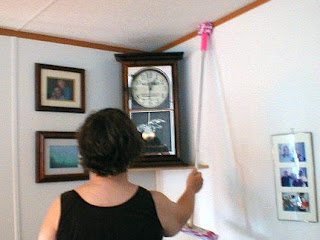 which is in another Etsy ad, you can dust mop or wet mop, and get those pesky cobwebs that appear overnight in the ceiling corners.

Or choose the complete set of Swiffer pad, duster, and dish scrubbie set.


http://www.etsy.com/shop/StitchnFrog
Posted by Stitch 'n Frog at 9:29 AM 1 comment:

The Itsy Bitsy Spider has a CAL happening for her Pumpkin Patch pumpkins.  I'm working on one tonight.  This one is exactly by the pattern, tomorrow I'll start a second one that will have variations.  I already have an idea of what I want to do with it.  And it'll be fun~:o)

Want to join us?  http://itsybitsyspidercrochet.blogspot.com/2010/09/pumpkin-patch-cal-materials-list.html
Posted by Stitch 'n Frog at 8:17 PM No comments: