Dishcloth War? It's on?

Crochet Goddess said it first, the Dishcloth War Is On and in our house it appears that she is right.  Wendy and I also are hard at work on dishcloths for Christmas.

We enjoy making them because they are "brainless" hand-work that is useful, used, and enjoyed by those who receive them, including us.

As a child I had never used a Store Bought dishcloth.  All of ours were hand crocheted by someone in the family.  But as a young housewife, I never used a hand-made dishcloth.  Then, many years later, after being retired early due to medical issues, I began crocheting my own again and now wonder why I ever liked the store-bought ones.

So today we will be making more dishcloths for gifting to friends and family, as we rest and watch a movie or two.  We had a not-fun day at the doctor's and pharmacy yesterday, and actually are in need of a day to just rest.

While at the doctor's, I got my pneumonia shot/booster.  Darned if it doesn't have my shoulder feeling like it's the size of a grapefruit!  I've never had a reaction to the shots before, and wonder if they changed the formula or if I've just gotten more sensitive . . . .  Me?  Sensitive?  BwaaaHahahahaha~

Our copyright pattern for Crochet Easy Dishcloth Pattern ~
Posted by Stitch 'n Frog at 3:43 AM 3 comments:

May you have enough happiness to keep you happy.


Enough trials to keep you strong.


Enough sorrow to keep you human.


Enough hope to keep you thoughtful.


Enough failure to keep you humble.


Enough success to keep you eager.


Enough friends to give you comfort.


Enough faith and courage in yourself to banish depression.


Enough determination to make each day a better day than yesterday.

Once there was a Mister Winkie,
who was gonna get shrinky-dinky,
because it was so cold.

But crafty Mrs. Winkie,
crocheted a warmer for his winky,
and it was a sight to behold.

Now Mr. Winkie is warm and toasty,
'cause Mrs. Winkie loves him the mosty,
and now their story has been told.
Poem by Wendy G 2006

Give the gift of green this Christmas

Give a Green Christmas gift this year~ 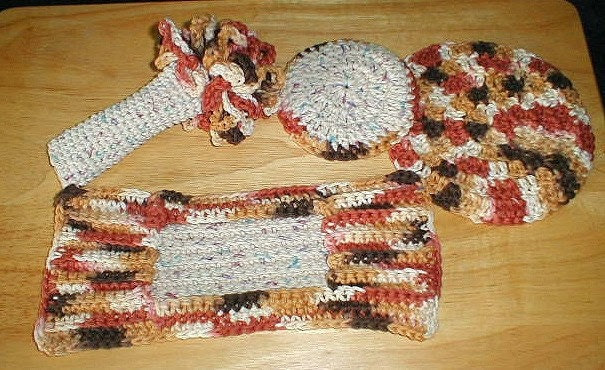 This is a set of reusable cleaning supplies, with a Broomstick Duster, a Dish Scrubbie, a Dish Cloth, and a Swiffer Sweeper cover.
All are cotton, or cotton with acrylic, and all are machine washable & dryable.
They can be found in my Etsy Store here - 5 piece green cleaning set
Posted by Stitch 'n Frog at 12:34 PM No comments: